Can you believe it's been five years already? This August, bumped up from its original schedule of April, 2009, the world will get to watch Afghanistan go through the motions of another presidential election. An estimated 140 million dollars is expected to come out of the pockets of American taxpayers to cover the cost. With Afghanistan falling increasingly into anarchy and violence, the current administration wracked with corruption and ineptitude, will a new go-around make any difference? Well, let's take a little history lesson. 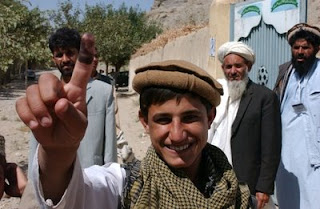 Anyone who followed the news in 2004 remembers Afghanistan's triumphant first run at democratic elections. TV footage of Western favorite Hamid Karzai campaigning with his foreign bodyguards behind him. Voters waving purple thumbs. Women in burqas casting ballots. An easy win with the interim president sweeping more than 50% of the vote against a field of twenty-two opponents. 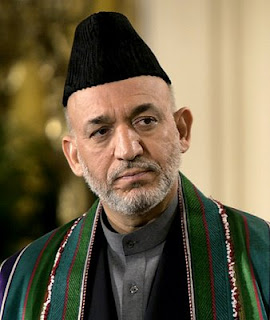 Here's what you may not know--and I don't mean that purple ink turning out not to be indelible after all! Exactly who thought up Afghanistan's presidential election code seems to be a mystery. Certainly Karzai's foreign backers signed on to it, though it bears no resemblance to their own election rituals. But who drafted and signed it into law is undisputed. Then interim president Hamid Karzai. Among minor red flags, such as that only Muslims can run for any office in Afghanistan, several more controversial provisions stand out.

1) Campaigning is only permitted for thirty days before an election. This, of course, guarantees a huge advantage to any incumbent already known to the people, especially in a country where mass communication is still at a premium. Picture Obama getting elected with a thirty-day window for a campaign.

2) Any would-be candidate serving in government, military, or law enforcement office must resign position at least two months ahead of said campaigning. In other words, are you willing to risk your livelihood on the outside chance you can beat said incumbent?

3) No government resources or connections may be used by candidates in pursuing their campaign.

Not that these sound so bad, if applied equally to all. Now granted, I had not in 2004 done enough research into Afghanistan to be aware of the provisions of their electoral campaign. But since it's on their government website and widely available on the internet, surely Western media as well as occupants of the White House and Capitol Hill were aware of Karzai's check list. His opponents certainly protested at the stacked deck. So why was it never pointed out that the only candidate not required to obey the rules Karzai imposed on his opponents was--Karzai himself?
Not only was Afghanistan's top government official allowed to stay in office through the campaign, we all watched him using the full apparatus of his own government as well as the willing and eager support of his foreign allies in that hugely-televised campaign. Maybe because back in 2004, Karzai's winning was a given to the Western coalition as well as the Afghan people themselves, the election little more than a formality. Bottom line, we didn't want to question the fairy-tale ending.
Five years later, no one is expecting a fairy tale anymore. With ap 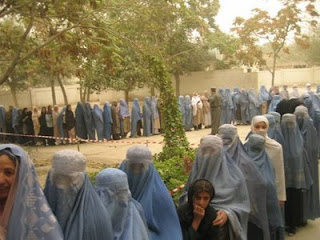 proval rating for the 'Mayor of Kabul' (so called because, one, his control only minimally extends beyond the capital and, two, because Karzai rarely leaves home to visit any of the country he rules) at an all-time low, neither Afghanis nor his former Western allies are showing much enthusiasm for another five years of Karzai. The difficulty is finding any alternatives.
At the moment, proposed candidates include any number of former warlords, now cabinet ministers and parliament members. And even some relatively decent possibilities. One contender, the Minister of Finance, has already stepped down from office in order to begin his campaign. But even the most wishful Western experts concede it is unlikely any of them will muster up support in such a short time frame to overcome the advantage of the incumbent. Especially since once again that election code doesn't seem to apply to the man who wrote it. Far from a 'thirty day window', Karzai has already announced his own rebid and is campaigning actively with no intentions of stepping down from office in the process.

The big question is how much difference it makes who occupies Kabul's Gul Khana Palace. As I've mentioned in another blog, elections don't equate with freedom. The United States recently finished one of its more hotly contested election campaigns (no thirty days, but closer to two years!). Were there disappointed people on election night when the final vote came in? Of course, there always is, no matter which side wins. But Americans don't go to bed on election eve scared to death the other party is taking over the next day.
Why? Because while we enjoy the democracy of choosing our leaders, we do so within a framework of law that does not change according to who scares up the majority vote. Win Democrat or Republican, the next day we can still worship God as we choose. We can still voice our opinions. We can still read, dress, eat, drink, move, work as we choose. We are still innocent until proven guilty, protected against unlawful search and seizure.
In a hideous reversal of that, whether Karzai wins out again or some new contender, Afghanis will wake up the next day under sharia law. Just this m 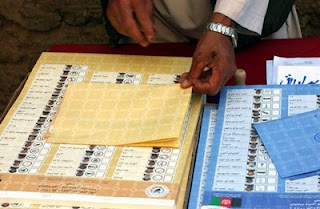 onth, the Supreme Court of Afghanistan ended the last hope of reversing that 23-year-old journalist's twenty-year sentence for printing an article off the internet. Since in Afghanistan, the accused don't get to defend themselves, he didn't even find out the case had gone to the Supreme Court until he was informed they'd confirmed his sentence. Karzai has shrugged off any suggestion of a pardon. Ditto for the two journalists condemned to death for wanting to give Afghanis the Koran in their own language. The TV producer mullahs decided was blaspheming Islam with those uncovered female faces. And so on. And those offenders were all Muslim. Things like freedom of worship are so far under the table, we can't discuss them here.
Still, if Karzai makes no pretence of human rights, not a single alternative candidate has even suggested moderating Islamic law for little issues like freedom of worship, speech, association, or anything else. One might even ask in all the talk of 'American values', which is really more valuable to the average American. The 'democracy' of choosing which leader to administrate unjust and oppressive law. Or a governing framework that offers protection and freedom to every one of its citizens, winner or loser in the last election.
When we trumpet 'democracy' around the world as a prerequisite for global peace and freedom, but whimper apologetically that the framework of law and justice that makes our democracy work is just a personal opinion issue we'd hate to impose on anyone else, we might as well pick up our ballot boxes and go home. 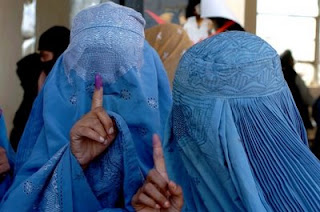 All to say that this time around, let's not get quite so excited at those purple thumbs the media love to show us. As long as Afghanistan's upcoming elections are being held within a governing framework of sharia law and Islamic totalitarianism, we might as well be pouring those one hundred and forty million dollars straight into a hole in the ground.
Posted by Jeanette Windle at 3:46 PM