Afghanistan Goes To The Polls 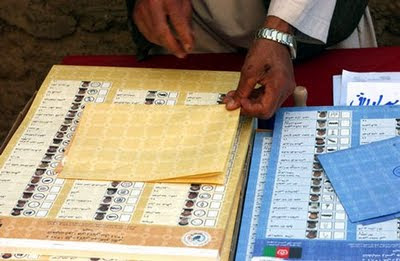 Afghanistan goes to the polls tomorrow amidst growing violence and little enthusiasm. Many of you have undoubtedly been following the drama on the news. For both Western governments and Afghanis, the toss-up seems to be the continuing rule of Hamid Karzai, which has been characterized by corruption, incompetence, and escalating violence, and 40 or so other candidates, none of which can muster enough votes among them to compete with the incumbent.

Afghan culture dictates throwing in with the perceived winner, and many warlords and regional and ethnic leaders have already promised Karzai their followers' votes. So much for individual democracy! Karzai, the master of compromise, has brought back two notorious warlords as his vice presidential candidates, promising top government positions to local leaders who come over to his side.

Meanwhile many rural areas don't expect to vote at all. Ironically, in extremely conservative areas where women can't vote personally, women outregister men two to one (registered, of course, by their menfolk with no proof necessary of their existence) where in areas where women can actually leave their homes, men outregister women two to one. All to say no one is expecting any honesty in the vote. But American observers are already saying that if the vote is within even 10-20 percent of what is considered fair, it will be counted a success. Interesting, considering such an election in Iran was roundly denounced. Let's not even talk about what would happen if 10-20 % off was counted in the U.S.

Is there any point to this election? Rather than repeat myself, let me direct you to two earlier op-eds on this subject.

Meanwhile, we should not throw up our hands in hopeless dismay. On the contrary, this is time to raise our hands in fervent prayer. How can we be praying as Afghanis go to the polls in just a few short hours on the other side of the globe?

*Pray for God's sovereignty and will in this election, regardless of the result.
*Pray for a move towards individual freedom and human rights, especially rights of worship, speech, and women's equality, none of which the Karzai government has honored under the current sharia legal system.
*Pray for followers of Isa Masih (Jesus Christ) who must worship underground but are growing in numbers and faith.
*Pray for the safety of American and other coalition soldiers in harm's way as they try to provide security for this election.

And if you have not yet read Veiled Freedom or know someone wanting to know just what is going on in Afghanistan--and what is the true Source of freedom--this is the perfect time. Here is a wonderful new review that came out today. http://www.blogger.com/
Posted by Jeanette Windle at 6:09 PM No comments:

I'm ready to admit it. I am a terrible blogger. Not because I don't continue to care passionately about the issues I've written on to date in this blog. Freedom of speech and worship. Justice on a national and international level. The consequences of actions made in fear or ignorance on my own nation's future as well as that of billions around the world. The suffering and courage and awesome fortitude of spiritual brothers and sisters whose lives have crossed mine around the world.

No, my problem is that I clearly do not have the compartmentalized brain necessary--well, let's say to be the president. Like Winnie the Pooh, I am a bear of very limited brain. When I get into the zone of a major writing project, every other focus is shut out. With magazine issues (see www.bcmintl.org for the on-line version of BCM World) and other ministry writing that is non-negotiable, you can guess what gets pushed to the bottom of the pile. This blog.

The good news (at least for those fans eagerly waiting) is that I am in the midst of massive rewrites for Veiled Freedom's sequel, Freedom's Furnace. From my POV, also good news is I've decided to stop stressing about one more writing task needing done as I bury myself again in Afghanistan and the incredibly complex situation of its upcoming elections, disintegrating liberties, and hidden ugliness as well as hope that is the background of this sequel.

Yes, my limited brain power is desperately needed elsewhere. So I am placing this blog on hold at least until my manuscript is turned in. I hope you will tune back in this fall when I can again think coherently beyond the pages of Freedom's Furnace for a blog posting worth reading. Meanwhile, I will be posting occasional links and comments on Twitter (@jeanettewindle) and Facebook if you are interested in following the Afghanistan situation and the implications of decisions being made now on the future of all freedom around the world. So if I do not yet count you as a Twitter and FB friend, I hope you will join me there.

Until the last page is written.
Posted by Jeanette Windle at 6:38 AM 1 comment: