The Reason for the Season

If there's one holiday gripe I've developed since arriving Stateside from overseas, it's the bombardment of programming and commercials determined to reduce the 'reason for this season' to some nebulous 'Christmas spirit'. From observation to date, this consists in renewed belief that Santa will finally bring an outdated toy you've been obsessing over since childhood. A taste for red and green, well-decorated house, hot cocoa and cookies. Extreme shopping in order to prop up a faltering economy. And as a sop to something other than rank materialism, the usual punch-line that celebrating with family and friends, and being cheerful and kind are maybe even more important than getting that item Santa forgot thirty years ago.

It isn't just the absence of a baby named Jesus born in a manger in this equation. As the Grinch put it so succinctly, Christmas is a WHOLE lot more. Around our world, Christians are celebrating, not stockings and presents and 'things bought in a store', but public testimony to God's ultimate gift. The birthday of the King of Kings. Emmanuel. God come to man as a baby--and Savior. Some celebrate freely. Others in courageous defiance of hostile neighbors. Still others in secret under death threat. For the follower of Jesus Christ, celebrating Christmas is a proclamation of faith that though the battle still rages on this planet Earth, the final victory is assured. The King of Kings will triumph. Isn't that more worthy of excitement--and belief--than childhood wishes coming true thirty years down the road?

Now lest I be accused of grinchiness (is that a word?), let me hasten to add I see no problem with enjoying the trappings of stockings and gifts and Christmas tradition, as God supplies. This year I confess to wallowing in family planning, shopping, decorating, baking--and, yes, cocoa (though no past-life toys). The reason: God has blessed our family this Christmas with the best gift possible outside the birth of His Son. For the first time in five years, all three of our adult sons came home for the holidays. My Navy son Steve (21) flew in from Sicily. My oldest son Mike (26), who works with homeless men and underage illegal aliens in Seattle, made it out from the worst winter storm to hit SeaTac airport in a decade. My middle son Josh (22) arrived from Wyoming with new daughter-in-law and six-week old first grandson. Our daughter Ellie (17) was ecstatic to have her big brothers all home. It has truly been a wonderful Christmas from beginning to end. 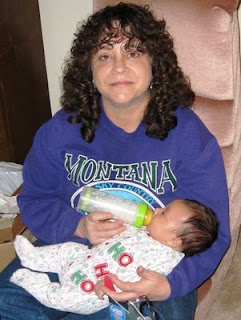 During Christmas Eve and Day, my husband kept email and Skype online to keep abreast of happenings among our Christian refugees in Orissa. The good news: though Christmas celebrations were low-key, the holiday passed peacefully without new attacks. In the two refugee camps our ministry sponsors for pastors and families under death threat, Christmas was celebrated with a worship service, gifts of clothing and other needed items, and a special Christmas feast. All made possible by donations that have come in, not just from North America, but the Ukraine, Peru, Ireland. A number of our children's and family camps from Latin America, Eastern Europe, Asia, even other provinces in India took special offerings out of their own scarcity for their brothers and sisters in Orissa. Isn't the family of God a wonderful thing when we work and love together? 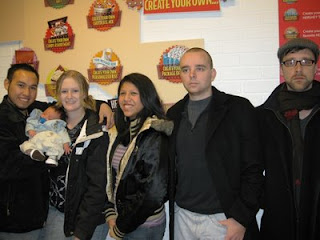 Now my family has scattered again, the reason you are hearing from me. Forgive me for inflicting pictures of a proud mother and first-time grandma. But, hey, this is my blog--and these are my first family pictures in years. A Happy New Years 2009. My wish for you and yours is that you may rejoice as much as I have this holiday season in family, friends, faith, and the 'happy ending' to mankind's story that Christmas foretells.

Posted by Jeanette Windle at 9:32 AM