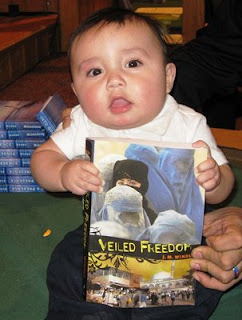 I would like readers to close this book with a better understanding of Afghanistan and the entire Muslim world and how vital and interconnected events there, especially such issues as freedom of worship, speech, human rights, are to our own country's future and security. Even more so, I want every reader to come face to face with the Person of Jesus Christ, the only true Hope of lasting change and freedom for our world.
Posted by Jeanette Windle at 6:35 AM